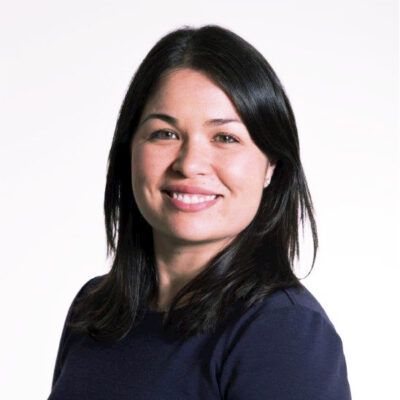 AON – Career Pivot
“The Return Hub suggested roles to me I wouldn’t have considered and supported me through the process.”

Geri had spent the first eight years of her career in investment banking, trading swaps and government bonds in Investment Banks in the UK and Australia. She left when an opportunity arose for her to join an early stage MedTech business. She became an investor in this business and ended up very successfully managing it through early stage research and development and clinical trials. During this time, she also had a little boy! Increasing interest  in the business from the US and China markets meant that her role would have required more travel and being away from her family so she began considering ways to use her skills to relaunch her career. She was initially considering a move back into banking to resume her trading career and was looking to return to a team environment with the stability of a great company. She hadn’t really considered other options until discussing options with The Return Hub.

The Return Hub spoke with Geri at length about her skills, experience and what she was looking for in a role. Her career change meant that she had built on her transferable skill set. She had developed her people and business management skills, gained a lot more confidence in dealing with people, and was able to adeptly handle difficult situations. Her entrepreneurial mindset was clear and added to her great product knowledge, business analysis skills and the ability to plan and execute new initiatives. She says:

“When you are running a small business, there is no hiding. If you don’t make sure something gets done, and properly, it doesn’t happen. This can help develop your mindset and confidence to take the initiative in every aspect of your work”.

The Return Hub identified that Geri would be suited to a range of sectors. They presented her with several opportunities one of which was as an Investment Consultant advising pension funds on their asset and liability management at Aon who were running a Return programme with The Return Hub.

We asked Geri to reflect upon the process of joining AON.

How was the interview process?

I met with four partners from different Aon offices in the country, three of whom were women. In my previous City role, I had never been exposed to senior women in my line of work, so I really valued meeting senior-level women in the role I was interviewing for, and hearing about their experiences balancing work and personal commitments, and the flexibility and support Aon had offered them.

The people I met with during the interview process made me feel that my previous experiences, both in the City and outside it, were valued and I would have a lot to offer.

How did it the role compare with your expectations?

The people in my team are fantastic – they’ve been helpful and welcoming. AON has a great culture and an inclusive working environment. I’ve had a lot of different opportunities offered to me including joining the Responsible Investment team which is the work I am most enjoying so far. The work really IS agile/flexible – there is no pressure to be the first one in or last one out, and working from home one day per week is encouraged – this is helpful when juggling family commitments.

How did The Return Hub help you with your role?

I spent several frustrating months attempting to engage with recruiters who had no idea what to do with the “gap” in my CV. Finally I was put on to The Return Hub who helped me to sharpen up my CV and within 2 weeks of our first meeting, I had several interviews booked in. They suggested roles to me I would not have previously considered (due to not thinking I would be qualified for them!) and supported me throughout the whole process.

What advice would you give someone who is thinking about taking some time out or who is due to return?

Find out more about how the Return Hub could help you with Relaunching or transitioning your career options at www.thereturnhub.com

As Featured in and with Thanks to